Raise a pint (of blood) in honor of Dr. Charles Drew’s life-saving research and inventions!

Dr. Charles Richard Drew was a Black surgeon, professor, and blood transfusion and blood bank pioneer whose work has saved innumerable lives globally. Born in Washington, DC, in 1904, his father, Richard, was a carpet layer and his mother, Nora (née Burrell), trained as a teacher. They lived in DC’s Foggy Bottom neighborhood, which was then largely middle-class and interracial. In 1922, Charles graduated from local Dunbar High School where he had lettered in four sports, helping him receive an athletic scholarship to Amherst College in Massachusetts.

Dr. Charles Drew's entry in his 1922 Dunbar High School yearbook. Courtesy of the Moorland-Spingarn Research Center via the National Library of Medicine

Persevering in the face of racism at Amherst, Drew graduated with a Bachelor of Arts degree in 1926. He then taught science and athletics for two years at Morgan University (a historically Black college/university, or HBCU) in Baltimore. Earning enough money to attend medical school, Drew crossed the border to Montreal, Canada, and obtained a Doctor of Medicine and Master of Surgery degree from McGill University in 1933. Dr. Drew’s first faculty appointment after graduation was teaching pathology at DC’s Howard University (another HBCU) from 1935 to 1936. He then became a surgery instructor and assistant surgeon at Freedman’s Hospital, a federal-government-operated facility associated with Howard.

In 1938, Drew began graduate work at Columbia University’s Presbyterian Hospital in New York under a two-year Rockefeller Foundation Research Fellowship in surgery. Drew’s work focused on trying to solve one of the most challenging medical problems of the time: how to “bank” or store blood so it would be available for transfusions long after it was donated. Drew’s doctoral thesis, “Banked Blood: A Study in Blood Preservation,” reviewed previous work in the field and shared his experimental research findings at the hospital. He outlined best practices for how to collect blood with sterile equipment, transfer it into sterile containers, treat it with anticoagulant, store it at a constant temperature in refrigerators that were reliably efficient, and transport it. In 1940, Drew earned a Doctor of Science in Medicine degree, becoming the first African American to receive this distinguished degree from Columbia.

“Drew worked with [John] Scudder and E. H. L. Corwin to draw up a blueprint for Blood for Britain. Their blood bank at Presbyterian [Hospital] served as an organizational template, but had to be scaled up enormously to collect, process, and store large amounts of plasma at six (later nine) different hospitals. Besides the basic blood bank operation, they had to set up procedures for extracting plasma and ensuring that it would still be uncontaminated and safe to use when it arrived in Britain. Plasma was separated from the blood cells by centrifuging or sedimentation, then the plasma from an average of eight collection bottles was pooled (using an aseptic procedure in a dust-proof, air-conditioned, ultraviolet-lighted room, under a lab hood), and a sample cultured for bacteria; merthiolate (an anti-bacterial) was added, and the batch tested again after a week. Finally, each batch was transferred to a shipping container (again using aseptic methods) and diluted with sterile saline solution. A final sample for bacteria testing was taken before the containers were sealed and packed. Despite its size and complexity, the project was set up quickly, and a trial shipment of plasma was sent to England in early August. The British reported that it was ‘entirely satisfactory’ and the program opened officially on August 16 [1940].”

In the end the program delivered over 5,000 liters of plasma to Britain by January 1941. 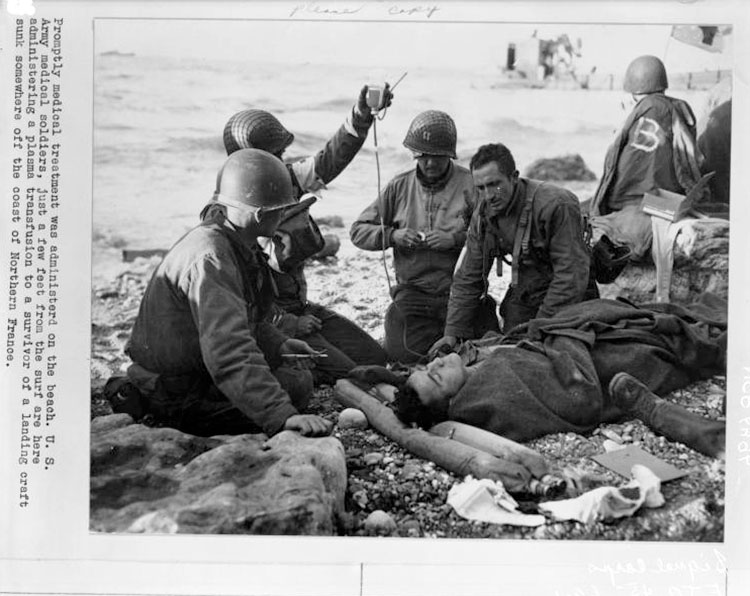 US Army medical soldiers administer a plasma transfusion to a survivor of a landing craft sunk somewhere off the coast of northern France during World War II. Courtesy of National Museum of Health and Medicine Otis Historical Archives via Flickr

Drew became the first medical director of the American Red Cross Blood Bank that same year. Among his innovations there were mobile blood donation trucks with refrigerators, which were nicknamed “bloodmobiles.” After he resigned, the Red Cross ruled that the blood of Blacks would have to be stored separately from that of Whites—a racist policy that remained in effect until 1950.  Drew publicly criticized this policy as unscientific and “insulting to African Americans.”

Drew returned to his first love of teaching in Howard University’s department of surgery and became chief surgeon at the Freedmen’s Hospital. Between 1941 and 1950, Drew trained more than half of the Black surgeons certified by the American Board of Surgery during that period.

Drew’s professional distinctions included becoming the first Black surgeon selected to serve as an examiner on the American Board of Surgery. The National Association for the Advancement of Colored People (NAACP) honored Drew with its prestigious 1944 Spingarn Medal “for his outstanding work in blood plasma; research led to establishment of blood plasma bank.” Unfortunately, racism continued to raise its ugly head; Drew was never accepted for membership in DC’s chapter of the American Medical Association (AMA) because they only allowed Whites to join at the time. This meant that he could not become a member of the national AMA. However, Drew was elected to the International College of Surgeons in 1946.

Sadly, at the age of 45, Drew died from injuries after a car accident while traveling for business in North Carolina. Contrary to a popular myth—repeated on an early episode of the TV series M*A*S*H (“Dear Dad . . . Three”)—Drew’s death was not due to being refused a blood transfusion in a North Carolina hospital because of his skin color. Three White surgeons tried to save his life but, unfortunately, his injuries were too severe. Drew’s funeral was held on April 5, 1950, at the historic Nineteenth Street Baptist Church in Washington, DC.

On a family note, Drew was married to Minnie Lenore Robbins, who had been a professor of home economics at Spelman College (another HBCU). They had three daughters and a son. In 1976, the National Park Service designated the Charles Richard Drew House (not open to the public) in Arlington County, Virginia, as a National Historic Landmark.

In 2015, Dr. Drew—often called “The Father of the Blood Bank”—was inducted into the National Inventors Hall of Fame. In addition to his blood research, Drew also was issued patents as co-inventor with Philip P. Goland for a surgical needle (US Patent 2,389,355) and a surgical suction apparatus (US Patent 2,397,257).