In its common 21st-century usage, “innovation” is often associated with the invention and widespread adoption of a new product, gadget, or software application. However, not all innovations are technological. Innovations can emerge from novel processes, methods, or techniques for accomplishing familiar tasks in new ways. A classic example is the division of labor. Industrialists such as automaker Henry Ford found that a team of industrial workers could produce a higher volume of finished goods when each worker focused on a single task in the multi-step process of assembling an automobile.

Similarly, while developing our Game Changers exhibition, we have been exploring several non-technical sports innovations. For example, think of the marathon runner who strengthens her lungs by training in a reduced-oxygen environment at high altitude or the NASCAR racer who gains a fuel economy edge by aerodynamically “drafting” behind another car—or Dick Fosbury, who transformed high jumping by introducing the “Fosbury flop” in the 1960s.

Richard “Dick” Fosbury (b. 1947) grew up in Medford, Oregon, a small town in a state with a passion for track and field. Fosbury’s innovation emerged from desperation born of personal tragedy. When Fosbury was fourteen, a drunk driver killed his younger brother Greg while the two boys were riding their bikes. The loss devastated the Fosbury family and led to his parents’ divorce. Fosbury blamed himself for Greg’s death and turned to sports to find some solace. At Medford High, Fosbury tried—but failed—to make the football and basketball teams. He joined the track and field team as a high jumper, but he struggled to master the dominant technique of the era. In the “straddle” technique, the jumper crosses the bar face down with his legs straddling it. Using the straddle method, Fosbury usually dislodged the bar and often failed to clear jumps of 5 feet (1.5 m), the minimum qualifying height for many high school track meets. Fosbury scored no points for his team and he worried constantly that he would be cut from the team and lose the one activity that provided some respite from his grief.

Fosbury debuted his new high-jumping technique in 1963 during his sophomore year while competing in a high school track meet in Grants Pass, Oregon. After again dislodging the bar with the straddle technique, Fosbury responded instinctively. On his next few jumps, he jumped with his back to the bar. By going over the bar backwards, raising his hips, and then kicking his legs up and over it, Fosbury could clear the bar cleanly, even though his overall center of mass remained below the bar. Fosbury soared higher with each jump; soon he was clearing 5 feet 10 inches (1.78 m) and scoring points for his team.

The technique became known as the “Fosbury flop” in 1964 when the Medford Mail-Tribune covered a local track meet and ran a photo with the caption “Fosbury Flops Over Bar.” The accompanying story suggested that Fosbury’s high jump looked like “a fish flopping in a boat.” Fosbury endured plenty more snickering from rival competitors and onlookers, but he ignored them. Fosbury’s biographer Bob Welch has suggested that Fosbury was willing to try his unorthodox technique and risk potential embarrassment because any ridicule paled in comparison to his ongoing sorrow. 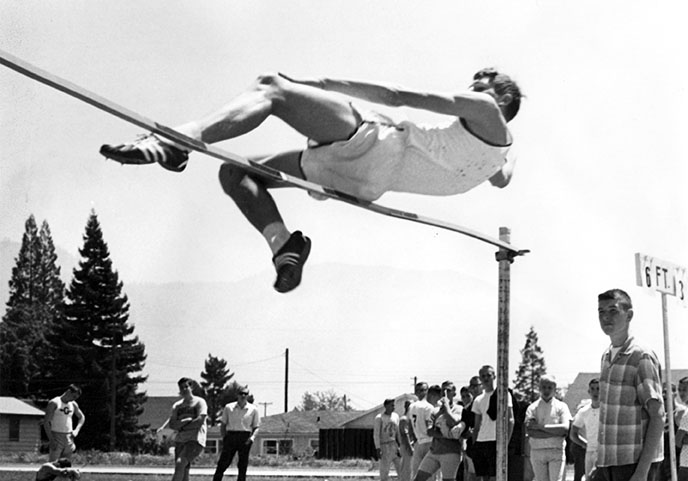 The Medford Mail-Tribune inspired the technique’s name when its local high school sports page captioned this photo, “Fosbury Flops Over the Bar.” From the Medford Star-Tribune, 1964, courtesy of the Eugene (OR) Register-Guard

There are no rules prescribing how a high jumper must cross the bar. However, Medford High’s coaches initially discouraged Fosbury’s back-first technique out of a concern for his safety. At the time, most high-jump landing pits were at ground-level and lined with sand, wood chips, or sawdust. This was generally fine since most straddle jumpers landed feet first. However, Fosbury usually landed on his head, neck, or back and his coaches worried that he would sustain a serious injury. In the 1960s, university track teams had begun to pad their landing pits with bundles of foam held together with a mesh net, a precursor of the Port-A-Pit design that was eventually commercialized by inventor Donald Wallace Gordon. After purchasing a new Gordon Port-A-Pit, the University of Oregon track team offered its retired landing foam to Medford High and Fosbury was able to safely resume his flop. During his junior year, Fosbury jumped 6 ft 3 in (1.91 m) and broke his high school record. During his senior year, he cleared 6 ft 5 ½ in (1.969 m), placed second in the state, and earned a full athletic scholarship to jump for Oregon State University (OSU) in Corvallis.

Fosbury enrolled at OSU in 1965 and struggled early on. Track coach Berny Wagner believed Fosbury would eventually achieve greater results using the straddle method and convinced him to practice it, although he allowed Fosbury to use the flop during freshman meets. Fosbury was inconsistent, jumped poorly, and nearly lost his scholarship. He also struggled off the track. Fosbury’s grades suffered; he got kicked out of his fraternity and split up with his girlfriend. Fosbury narrowly avoided being drafted for the Vietnam war when his bad back—shaky after years of flop landings—earned him a medical deferment.

Fosbury finally broke through in 1968. At the season’s first meet in Fresno, California, Fosbury used his flop to clear 6 feet 10 inches (2.08 m)—a new OSU record—and thereafter Wagner embraced his unorthodox technique. Later that spring, Fosbury won the Pac-8 high-jump title followed by the NCAA championship in June. Two weeks later in Los Angeles, Fosbury cleared 7 feet 1 inch (2.16 m) to win the Olympic Trials and earn a trip to Mexico City . . . or so he thought. In a controversial decision, the United States Olympic Committee decided to rerun the trials in September in Echo Summit, California to replicate the high-altitude conditions in Mexico City. Along with two other jumpers, Fosbury cleared a personal best of 7 feet 3 inches (2.20 m) to secure—again—his spot on the US Olympic team.

In Mexico City, Fosbury electrified the crowd with his unusual but effective jumping technique. On 20 October 1968, Fosbury outdueled his US teammate Ed Caruthers and the Soviet Union’s Valentin Gavrilov by clearing each successive height—7 feet, 2 ½ inches (2.20 m), then 7 feet, 3 ¼ inches (2.22 m)—on his first attempts. Fosbury took the Olympic gold medal and set a new Olympic record when he cleared 7 feet, 4 ¼ inches (2.24 m) and Caruthers missed on all three attempts. Having secured the gold medal, Fosbury raised the bar again, but failed to equal Valeriy Brumel’s world record of 7 feet, 5 ¾ inches (2.28 m). Nevertheless, Fosbury stood at the pinnacle of his sport after a meteoric rise. Just five years earlier, a grieving Fosbury had been unable to reliably clear 5 feet with the traditional straddle method; in 1968, Fosbury rode the “Fosbury flop” to Pac-8, NCAA, and Olympic titles, while setting Oregon State, US, and Olympic records.

Fosbury could not earn a living as an amateur high jumper, so he returned to Oregon State and graduated with his civil engineering degree in 1972. In that summer’s Munich Olympics, straddler Jüri Tarmak won the gold, but 28 of the 40 competitors used Fosbury’s new technique. Since then, the Fosbury flop has supplanted the straddle method as the dominant technique among high jumpers at all levels.

As for Fosbury? He moved to Idaho in 1978 and co-founded Galena Engineering, a firm that still provides surveying and construction management services. He has been an advocate for youth sports and worked with other former Olympians to promote peace and other Olympic ideals. In January 2019, Fosbury won a local election to serve as a Blaine County (Idaho) Commissioner. Yet Fosbury will always be remembered for revolutionizing his sport. Unlike most “flops,” Fosbury’s unconventional approach to high jumping remains a winning technique. 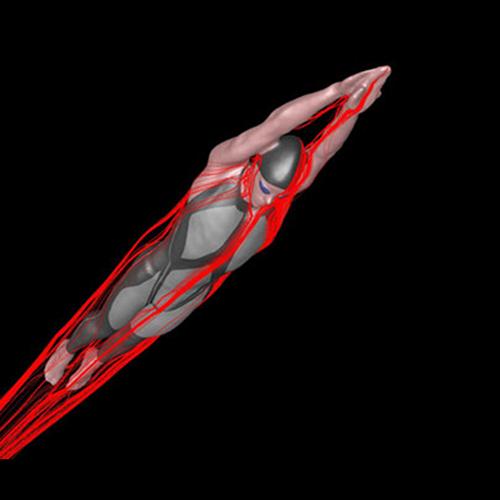 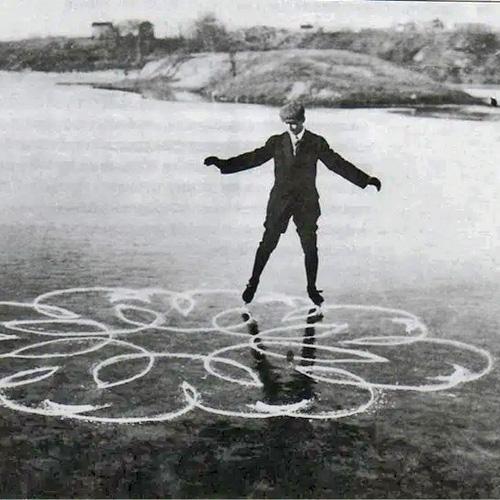 How Skating Acquired and Lost Its “Figure”

Thanks to invention and innovation, the history of figure skating is truly head-spinning. 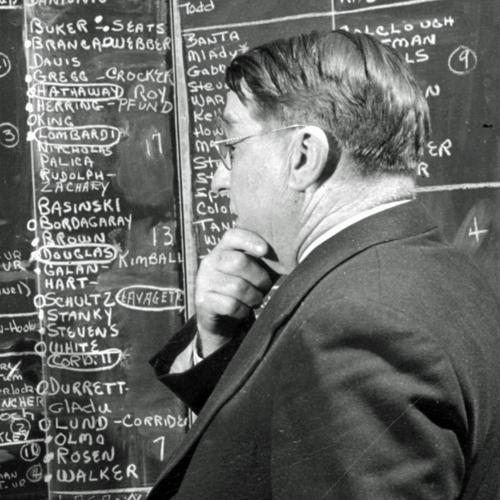