Components of an epinephrine auto-injector: (1) latch mechanisms secure the plunger; (2) a spring drives the plunger and the needle; (3) the plunger; (4) epinephrine; (5) retractable protective casing for needle. The needle exits through a protective barrier (6) when pressed against the skin. Courtesy of Wikimedia

Peanuts—a tough nut to crack for those with allergies.

Before the COVID-19 pandemic, parents and educators also worried about keeping school-aged children safe from food allergies, especially peanuts—with good reason. Estimates vary, but between 2 and 5 percent of American students who are 18 or younger contend with this potentially life-threatening allergy. Case numbers in the US continue to increase, and most kids won’t outgrow the allergy. Until recently, doctors advised families to avoid exposure to peanuts.

Why are peanuts a healthy food for some but kryptonite for others? This seemingly unassuming legume packs a punch, containing 16 proteins that are allergenic. Consequently, ingesting trace amounts—even the equivalent of a single grain of salt—can trigger symptoms within minutes, including tingling in the mouth, inflammation, hives, shortness of breath, nausea, and vomiting.

More severe cases may also experience food-induced anaphylaxis, when the immune system goes into overdrive, reacting to what it perceives as a harmful foreign substance. Life-threatening symptoms can develop, such as swelling of the throat, constricting of airways, rapid pulse, and a severe drop in blood pressure. Fortunately, inventors have been working to address this health problem.

Sheldon Kaplan was a biomechanical engineer who enjoyed tinkering with computers, model trains, cake icing—you name it. Working for a company that went by the apt name Survival Technology, he designed the first emergency medical kit for NASA’s Apollo missions to the moon. In the early 1970s, the government agency contracted Survival Technology to redesign its AtroPen, an injection device for self-administering atrophine, a medicine to treat irregular heartbeat. Company founder Stanley J. Sarnoff, who already had several patents related to hypodermic injectors, asked Kaplan to work on the project. 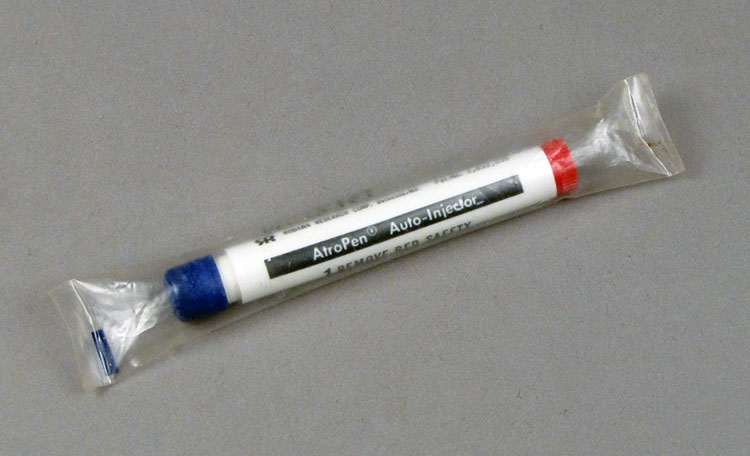 The AtroPen Auto-Injector was designed for astronauts to allow them to self-administer atrophine for irregular heartbeat. The US military renamed the device the ComboPen and issued it to soldiers combating chemical weapons. © Smithsonian Institution; photo by Rachel Anderson, NMAH-AHB2013q059600

Prior to the invention of the auto-injector, medicine needed to be drawn from a separate vial into a syringe and then injected. This worked for trained personnel in medical settings, but in an emergency situation and for those without proper training, it was risky. Medical auto-injectors such as the AtroPen automated the use of a syringe and enabled those without medical training to deliver life-saving medicine.

The device works by thrusting it against a person’s outer thigh. This activates a spring-loaded mechanism, launching a needle deep into muscle tissue to administer the medicine. The problem with the AtroPen was that it could only hold a certain amount of medicine, sometimes below the prescribed dosage. Its casing was made of stainless steel, a sturdier material than glass. However, unlike glass, steel could make some drugs, including atrophine, unstable. Kaplan needed to address these limitations. 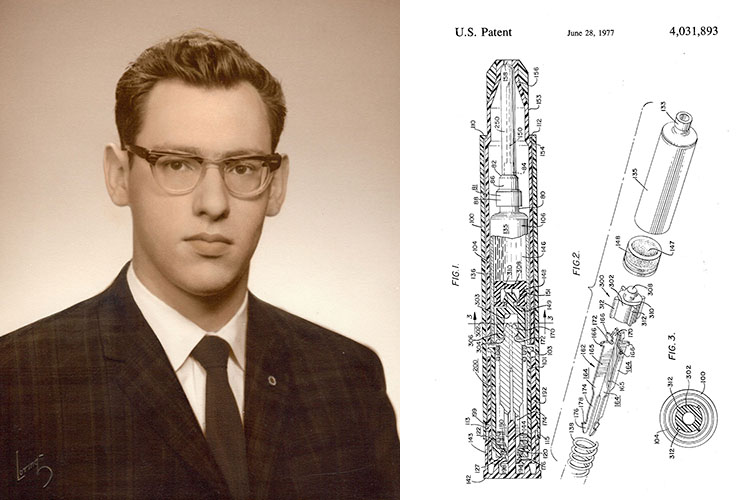 Sheldon Kaplan, seen here in his 1962 college yearbook photo, was inducted into the National Inventors Hall of Fame for the EpiPen. It was based on his US Patent 4,031,893 (right) for a “Hypodermic injection device having means for varying the medicament capacity thereof.” Courtesy Northeastern University Library via Internet Archive and USPTO

Kaplan harnessed his analytical and creative skills, using tempered glass for the casing and improving the calibration of the spring so the device could inject larger dosages of medicine. NASA rechristened Kaplan’s improved auto-injector with the catchier name AstroPen. However, it was the US military that made extensive use of the redesigned auto-injector—atrophine is also an antidote for nerve gas. Since the mid-1970s, American soldiers in combat situations involving chemical weapons have been issued what the military calls ComboPens for emergency self-administration of atrophine.

Kaplan and others at Survival Technology soon realized this technology could have a broader impact, and could be particularly useful in triaging severe allergic reactions. They tweaked the design to carry epinephrine, the synthetic form of adrenaline, known as the “fight or flight” hormone. For those experiencing food-induced anaphylaxis, quick administration of epinephrine increases heart rate, blood pressure, and breathing rate, alleviating symptoms until emergency responders can provide more substantive treatment. The inventors were issued US Patent 4,031,893 in 1977 and the FDA approved the EpiPen for commercial use in 1987.

Since then, the EpiPen has been a game changer for those with severe peanut and other allergies. However, it and other epinephrine auto-injectors (EAIs) on the market have their drawbacks, namely: affordability, portability, and usability/safety.

EpiPens are sold and meant to be carried around as a set of two, and children may need multiple sets—one each for, say, home, school, and after-care, increasing costs. Several years ago, market dominance of EpiPens led to price gouging—a set went from about $100 in 2007 to a whopping $600 in 2016. In response to public outcry, Mylan (now known as Viatris), the company that produces EpiPen, as well as other manufacturers, began to offer financial assistance. Somewhat less expensive generic EAIs also became available. 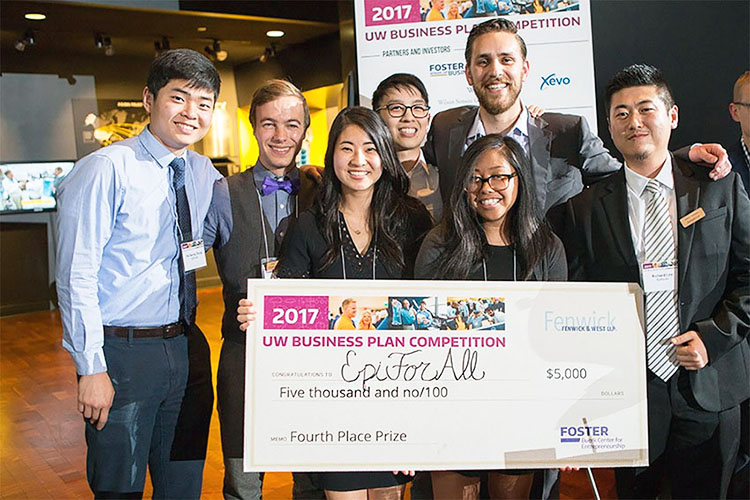 The college students behind the EpiForAll refillable auto-injector partnered with a local hospital to create a solution to cost-prohibitive EpiPens. The team received mentoring and support from faculty at the University of Washington, particularly from within the school’s Engineering Innovation in Health program. Courtesy of University of Washington

Engineering students Zachary Chen, Ha Seung Chung, Jazmine Saito, Wealth Salvador, and Shawn Swanson considered affordability of EpiPens and other EAIs less a problem of economics and more one of design. They reasoned that a device without preloaded epinephrine would lower manufacturing costs. Also, if consumers need only replace the medicine and not the device, that would result in additional savings. So the group developed the EpiForAll, an inexpensive, reusable auto-injector (their US Patent 10,532,157 was issued in 2020) that can be refilled by prescription as needed by a pharmacist with low-cost ampules of epinephrine. The company that grew out of their endeavor, called MedsForAll, is in the process of commercializing the invention.

Many people who need to carry EAIs at all times find the six inch-long EpiPens bulky. And forgetting the device is typical. Twins Eric and Evan Edwards, who both contend with life-threatening allergies, brainstormed how to solve problems of portability and non-compliance. In their late teens, they developed a more compact EAI (US Patent 6,530,904). Since then, they have been granted several patents as they refine and enhance their initial idea. Their company, now called Kaléo, produces the cellphone-sized AUVI-Q epinephrine injector. To make it easier and safer to use, the AUVI-Q was the first commercial device to provide step-by-step voice instructions for use.

In recent years, other young inventors have also addressed these issues by designing EAIs that are similar in size and shape to objects people carry on a daily basis. College student Tyler Ebert, who worked at a campus restaurant and was concerned about diners with food allergies, teamed with Christopher Kuehn, an engineering major, and applied for a patent on a wallet-sized device they called the AdrenaCard.

Other inventors have created wearable auto-injectors. Conor Cullinane, Elijah Kapas, and Matthew Kane, who met in college while studying aeronautical and mechanical engineering, received US Patent 10,265,471 in 2019 for a round EAI small enough to be worn on a bracelet or necklace. Their company, Pirouette Medical, is working to bring the invention to market. Bioengineering students Albert Han, Alex Li, Jacob Mattia, Justin Tang, and Callum Parks designed the EpiWear, an EAI made with 3D printing technology that is meant to be worn like a wristwatch. 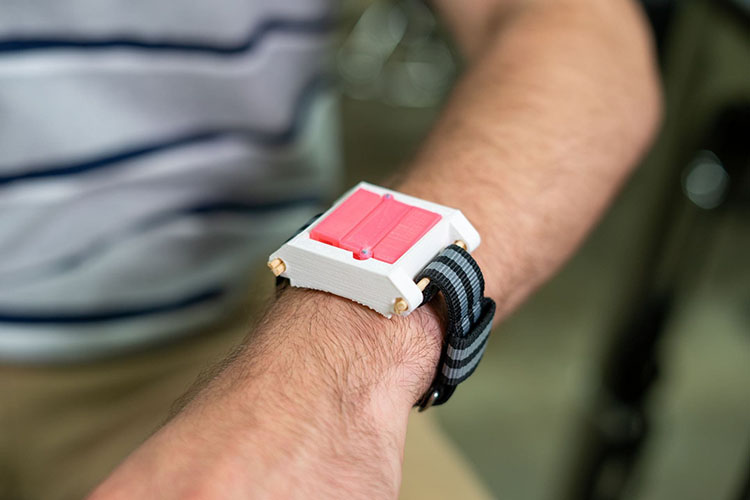 A prototype of the EpiWear wearable epinephrine delivery device developed by Rice University engineering students. The parts of the auto-injector are separated into three hinged compartments compact enough to be worn like a wristwatch. When needed, the device folds out and interconnects. Photo by Brandon Martin, courtesy of Rice University

Some inventors have worked to address people’s fear of needles and minimize accidental injections and lacerations that can result from administering an EAI.

The company Crossject is developing a needleless auto-injector called ZENEO. Adapting the automotive safety technologies of airbags and pretensioned seatbelt systems, a mini gas generator supplies concentrated pressure to break the skin and inject epinephrine deep into muscle tissue. Different versions of the device can be used to administer other medicines as well.

Interested in the “biology side of innovation,” teenage inventor Jorja Suga has recently conceived a 3D printed needle-free auto-injector that she’s named the EpinJect.

Then there are inventors who believe EAIs should do more than administer epinephrine.

The company Aterica introduced the Veta system, a smart case designed to hold an EpiPen that connects via Bluetooth to a mobile app. Sensors within the case monitor an EAI’s location, removal from the case, temperature, and expiration date. In an emergency, the device sends alerts to designated contacts.

College student Joey DiGangi developed the EpiCenter App and started the company AssureTech in response to his own experiences with severe nut allergies and forgetting to carry his EpiPen. His app tracks EAIs and sends an alarm to a person’s phone to “retrieve the device.” In an emergency, the app provides a translated “Help” message, locates the nearest hospital, calls emergency services, and provides contacts with the auto-injector’s exact GPS location.

These are just some of the solutions that inventor-entrepreneurs are creating to help people with severe allergies in an emergency.

VIDEO: How does an EpiPen work? 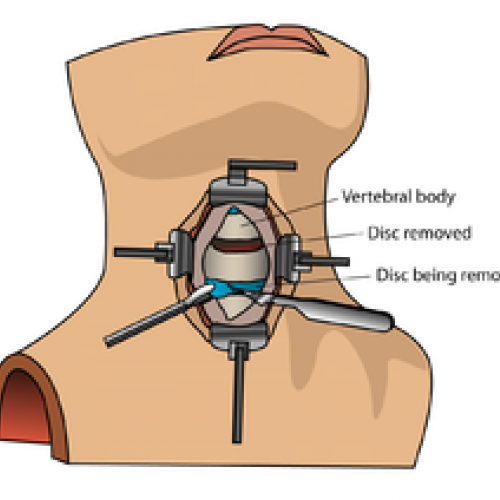 Feeling a bit like the “Six Million Dollar Man” after cervical surgery . . . 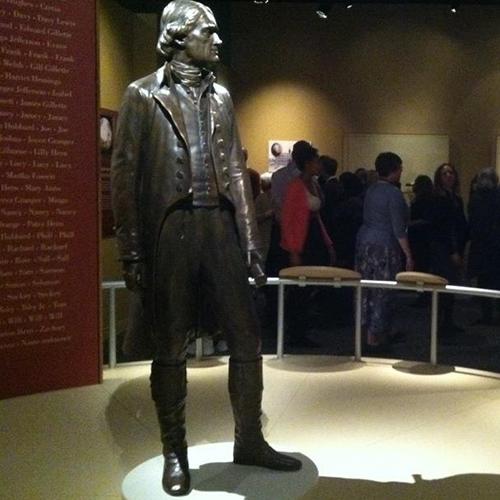 What implications might 3D printing hold for the future?