Keep It Secret. Keep US Safe.

During our Inventing the Surveillance Society symposium on Oct. 25, we will be featuring World War II posters from the Archives Center in an “objects out of storage” program in the Museum’s 1East corridor.

Posters were one of the largest mediums for advertising during World War II. Advertisers invented new art styles, designs, and propaganda campaigns. One campaign related to promoting privacy.

During the US’s involvement in WWII (1941-1945) posters were a medium produced largely for people on the home front. They provided guidance on ways that people could feel that they were helping the war effort—one of which was maintaining secrecy.

Espionage and sabotage were serious concerns for US citizens during the war. The American film industry contributed to the paranoia by producing numerous films about spies. Also, government censorship meant that credible information was hard to find, and therefore people relied more heavily on rumors as information regardless of their truth.

Caricatures and stereotypes were typically used in posters at this time. Often the leader of the country symbolized the country itself—i.e. Hitler came to symbolize Nazi Germany. These caricatures sometimes took a monstrous form.These factors encouraged the production of government posters stressing the importance of national security and deterring information leaks and sabotage. They made people feel that secrecy and protecting their privacy was a patriotic duty. One series of posters was the “careless talk” campaign. “The beauty of the ‘careless talk’ campaign was that people could feel involved in the war, playing a part and combating the enemy, merely by doing nothing and keeping their mouths shut,” historian O.W. Riegel concluded.

An unforeseen consequence of these types of posters was that they increased paranoia about spies by making it seem like there was a spy around every corner. It also made people wary of being suspected of espionage.

In thinking about how this advertising might relate to our contemporary society I have observed that current advertising and propaganda about US citizens being spied on comes from the private sector, rather than the government. But I think that you can ask the same question of WWII posters that you can of contemporary advertising: Is encouraging people’s fear of spying in order to convince them to increase their privacy a good strategy? Do the ends justify the means? Join us for our symposium, Inventing the Suveillance Society, to explore these kinds of questions. 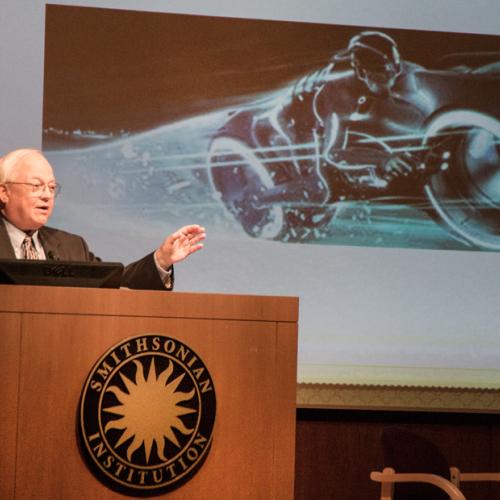 In October 2013, the Lemelson Center hosted this symposium that brought together scholars, inventors, policymakers, members of the media, and the public to explore the role of invention in a world where our actions (and transactions) are constantly monitored.

Can We Control Surveillance Tech?

With mounting concerns for national security, surveillance technologies are not going away. But is it too late to bring them back under at least some semblance of democratic control?