Mike Augspurger’s lifelong interest and training in mechanics, bicycle design, and off-road racing led him to start a bike company. Along with custom bikes, he made racing chairs for wheelchair athletes. But he was never satisfied with the basic wheelchair technology.

“I always thought, coming from bicycles, 'What about cranks? What about gearing?' I kept having an image of this design in my head, and I thought, 'I want to make my own. I think I can do better than this.'”

Augspurger wanted to create an arm-powered vehicle similar to a mountain bike for people who can’t use their legs. He bought and rode every handcycle available, noting what he liked and didn’t like.

“You want to innovate as much as you can, but that doesn’t mean reinventing the wheel. It’s copying up to a point, and then if you do have something innovative it’s no longer copying—it’s a new idea.”

After ten years of generating ideas and rough sketches, Augspurger built and tested his own handcycle. He wanted it to offer high performance over rough terrain. So he had to figure out how to provide the smoothest possible ride while having the cyclists pedal with their arms and steer at the same time.

“Mechanical engineering is like basketball. If you didn’t start when you were two years old, there’s no help. Chemical engineers can start learning what they need to know when they’re 18. But mechanical engineers need a lot of hands­-on experience with tools and materials, which later seems like intuition.”

Augspurger came up with an innovative design. Instead of putting the rider in a sitting position with his or her legs stretched out in front, Augspurger’s cycle has the rider’s legs folded back and straped into supports. The rider’s upper body rests on a pad, arms down, to reach the hand cranks. The handlebars in front—­with brakes and gearshifts­—can be used for steering when the cycle goes downhill. While pedaling, the rider can steer with the chest pad, which pivots and is connected to the steering mechanism.

Throughout the long process of design and development, Augspurger asked wheelchair athletes to test-ride his models.

Working with athletes with disabilities made Augspurger aware of each person’s unique needs and abilities, and his customized construction allows him to adapt the handcycle for each individual. Although custom building makes his cycles expensive, he isn’t interested in large­-scale production. He prefers to experiment and design new kinds of cycles and other products. 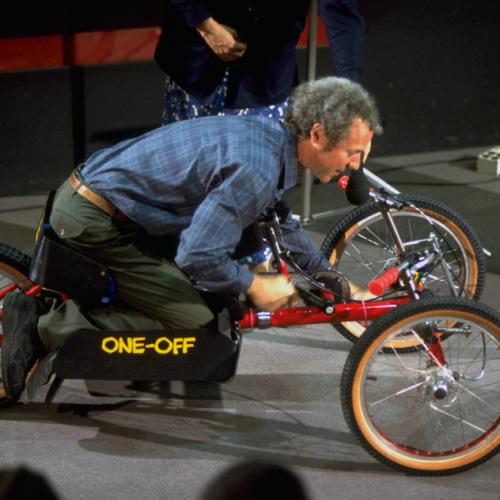 Mike Augspurger is an expert cyclist, a skilled machinist, and a designer and builder of bicycles. Augspurger, founder of One-Off Titanium, Inc., is a specialist in custom and unusual titanium frame bicycles, including the first all-terrain handcycle designed for wheelchair athletes.