Seeing in the Dark: Aerial Reconnaissance in WWII

Many of us who work at the National Museum of American History have a favorite object or two. Mine is part of the photographic history collections. It’s a General Electric Mazda FT-17 flash lamp, whose prototype was invented by Harold “Doc” Edgerton at MIT to take aerial reconnaissance photographs at night. Why do I like it? Well, OK, I’m a photography geek. But the tube is elegant yet cool, and it has a great story.

Edgerton had originally invented an electronic stroboscope to study high-speed machinery in motion. But he soon turned his light (and camera) on a vast range of subjects. Applying his solid engineering training, vivid imagination, and good business sense, Edgerton continually adapted and commercialized the technology he had created. In the 1940s, this work took Doc into the sky.

Major George Goddard of the army’s photographic laboratory at Wright Field (now Wright-Patterson Air Force Base) visited Edgerton at MIT in 1939. Goddard had joined the US Army Signal Corps in 1917 and was appointed instructor of aerial photographic interpretation at the School of Military Aeronautics the following year. He knew firsthand both the value and limitations of aerial photography using existing technology. So he asked if Edgerton and his colleagues could build a strobe that would be powerful enough to take photographs from a plane, at night, from a height of a mile. “We can do that,” Doc said. “We haven’t got it in the house, but we can do that.” (1) That confidence produced an electronic flash system for night aerial photography that delivered information impossible to obtain in any other way.

The strobe that Doc originally designed to photograph events from the bleachers of Boston Garden provided a technical foundation for his electronic flash for military night aerial photography. But the components of this new flash system were bigger and more powerful than anything Doc had yet built. The flash tube is a tough monster; its 30 inches of strong, quartz glass, coiled into a xenon-filled spiral, withstood the 4,000 volts discharged through it. The tube fit into a reflector mounted in the plane’s belly or tail. Banks of capacitors, weighing up to 500 pounds each, were slung on the plane’s bomb racks and supplied power to the flash tube. A direct contact synchronized the flash to the equally oversized aerial camera.

In April 1941, the first experimental unit—camera, capacitors, flash tube, and reflector—was mounted in a B-18 and tested over Boston. But the system’s most famous test began on June 5, 1944, when an A-20 equipped with the flash took off for France, ahead of the D-day invasion forces. Doc recorded the results in his laboratory notebook on June 7, 1944: “The A-20 (No 449) went on its first mission on Monday night June 5 arriving at the target on June 6 around 130 am. The target was two road intersections south of Caen. Due to clouds the pictures were taken at 800 ft – 2000 ft. The photos were very good but there was no overlap. Some flack [sic] from ground machine guns was encountered at a town named Coustances. Villedieu-les-Poêles was photographed. I stayed up until 5 am to see the negatives out of the dryer.” (2)

Doc continued to tweak the giant flash system even as it saw use in many more missions during the war. One of my favorite runs, though, took place in August 1944, when Edgerton was testing the flash in England. Stonehenge, standing alone on the Salisbury Plain, proved a perfect subject for his experiments.

The nighttime aerial reconnaissance photography system developed by Edgerton and his colleagues at MIT, in industry, and in the military, was used throughout the war. The adaptation of the flash tube from peacetime photography of things like rodeos in Boston Garden to wartime reconnaissance flights over Europe is a testament to Edgerton’s creative mind. Throughout his life, Doc welcomed each new inquiry. “If you don’t wake up at three o’clock in the morning and want to do something,” Edgerton quipped, “why, you’re wasting time.” (3) 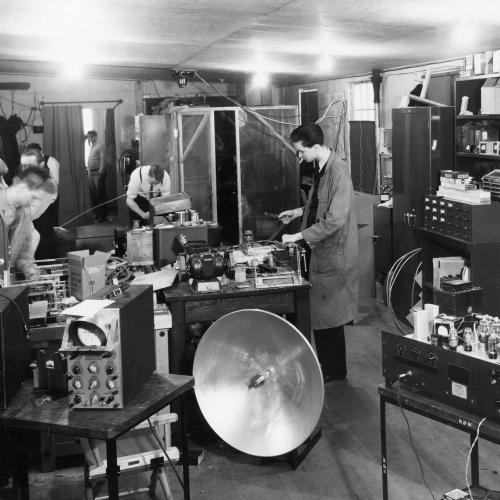 MIT in World War II: A Hot Spot of Invention